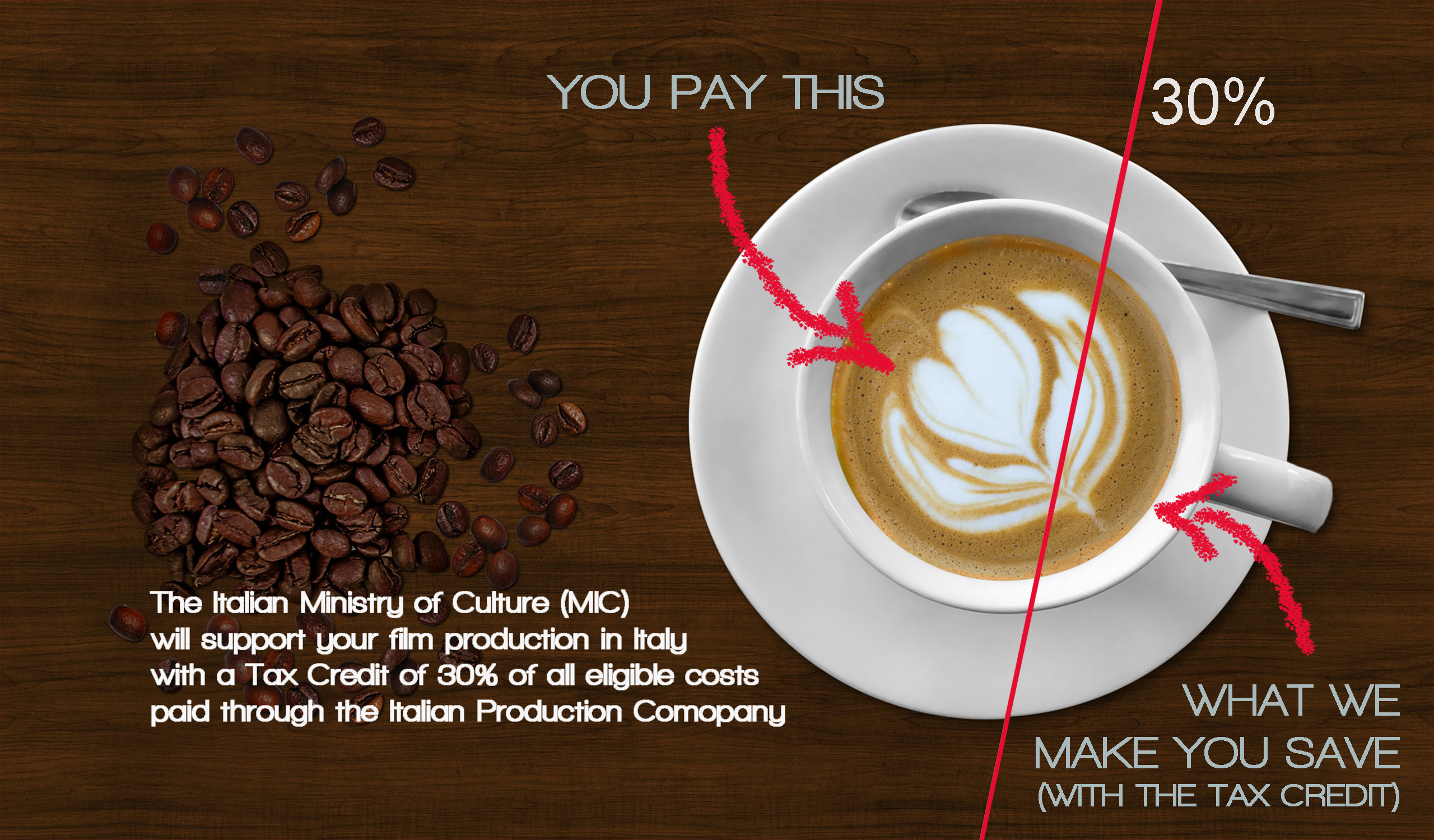 The Italian tax credit incentive supporting all audiovisual productions for international feature films, telemovies, television and web series, and video games.
The tax credit allows for a saving up to 30% of the eligible costs of production. And such eligible production costs cannot exceed the 75% of the overall budget for a single project.

Foreign producers are not qualified to apply directly for the Italian tax credit. An Italian production service company is only entitled to apply to the scheme. The Italian company will be subject to taxation in Italy and should meet certain legal requirements.

Tax credit percentage equal to 30% of the eligible costs of production paid by the Italian producer for each project. Production expenses, including pre and post-production expenses on Italian territory not to exceed the 75% of the total project budget.

One sixth of the 75% of the total project budget incurred in another EU country to be considered as expenses incurred in Italy.

In order to get the Tax Credit

An Italian Production Service Company should submit the Tax Credit Applications to the Ministry of Culture.

Such application should be submitted by the Italian company within 90 days prior to beginning of activities of the Italian Production Service Company. and must be countersigned by the Foreign Producer. The actual use of the tax credit is conditional upon this application;

The ministry of Culture, Cinema Department shall confirm the final amount of the tax credit accrued by the eligible title within 60 days following the date of submission of the final application.

ITALY BECAME THE MOST CONVENIENT SHOOTING DESTINATION IN EUROPE, THANKS TO IT’S TAX INCENTIVE, REGIONAL FILM FUNDS, AND VAT EXEMPTION FOR FOREIGN FILMS

1. The compliance of cultural eligibility test requirements according to the indicators.

2. Detailed Italian budget, script, schedule, crew and cast list, detailed listing of number of shoot days in Italy or in another EU country.

3. Foreign producer’s statement, in which should state if the film will primarily be released theatrically, on television or web broadcasting platform.

The ministry of culture of Italy will notify the Italian producer with an official letter the assessment concerning the cultural eligibility of the project within 30 days from the date of the submission of the application.

USE OF TAX CREDIT BY THE ITALIAN PRODUCER

EXPENSES INCURRED AND PAID BY THE ITALIAN PRODUCER